In this post I switched to English from Hungarian because I also want to share my thoughts and experience with the international community and study group which were good resources during my exam preparation.

Last week Friday (11th of March) was the last schedulable date for the VCAP6-DCV Design exam (mylearn link) and that was my exam date as well:D. As you probably already know, this exam is the successor of the well-known VCAP5-DCD, which was covered in the past years with two different exams.

The earlier one based on the vSphere 5.1, later on vSphere 5.5. I did the 5.1 based type of DCD actually twice. I failed at the first attempt in 2013, but my second DCD was a PASS, eventually. At that time the exam had 100 questions, mainly multiple choices and drag and drop questions and 6 MS Visio like design items. The multiple choices were in the most cases very time consuming with a lot of irrelevant text. I had to skip a few of these, because the multiple choices and the design based items were mixed randomly, so you did not know if the last design item will come up at the 96th place, or earlier. Even the backward possibility was forbidden, so you couldn’t flag and return to the items later. And obviously you can’t miss a design question, because it worth 25-50 points, while the multiple choices only one (drag and drop: 4-10). At my second attempt I had much batter time management.

I have heard that later the vSphere 5.5 based DCD exam has changed: multiple choices are gone, but there were more drag and drop (13 items) and more designs (8 items). A new type of design has also introduced, VMware calls it “Master design”. This must be very complex and comprehensive because the blueprint says minimum 30 minutes should be allocated to the master design.

Let’s go back to the VCAP6-DCV Design. VMware has announced the version 6 advanced level exams in three (first, second, third) blog posts in December, 2015. The design blueprint was available immediately, however the exams weren’t schedulable. The design beta registration opened at 2nd of Feb and closed after 3 days. I was lucky, because I did my registration on 5th of Feb around noon time, so just before the closing. I have red a few posts and comments that a lot of people missed it because there were only a few places available. It has a huge discount (because of the beta period), instead of 310 USD the price reduced to 100 USD.

The exam subscription was mandatory (via VMware myLearn) before the registration. 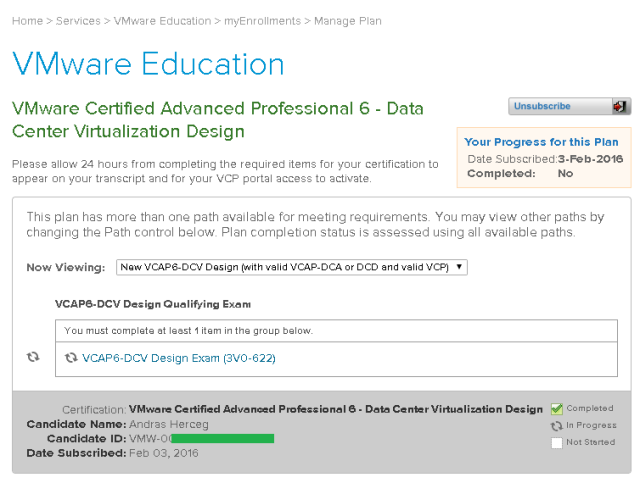 You have 245 minutes for the exam, that is 4 hours. If English isn’t your mother language, then you will receive additional 30 minutes automatically. So in my case that means 275 minutes in total. That is a lot, but this is needed. The beta exam has the followings, in total 31 questions:

I would say this version is harder as the v5.1 based, probably even as the v5.5. The 5.5 based (blueprint) is much shorter; has fewer questions (22 vs 31) and has less time (215 vs 275 minutes). The design items cover a much bigger area, are more sophisticated and comprehensive. Read very carefully the design description and the requirements, filter it to the relevant info. If you have spare time at the end, check at least the design items once again. I had around 20-30 minutes left to check the designs again. So it seems 275 minutes is enough. 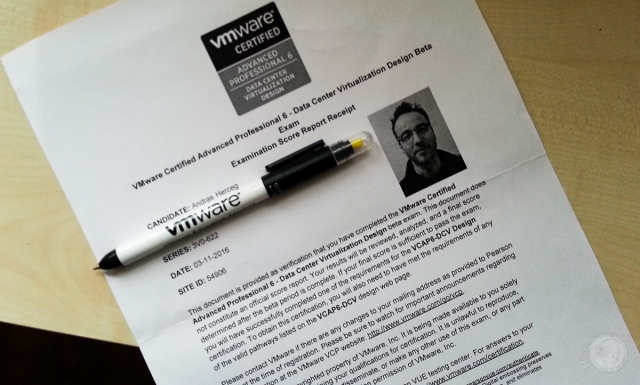 The results will be available after 05/31/2016. For details check the Beta Exam Status tab on the VMware Certification Program Beta Exams

In the next post I will collect the study resources (whitepapers, books, blog posts, study groups, etc.) which helped me during the preparation.

This entry was posted in VCAP-DCD and tagged certification, VCAP, vcap6. Bookmark the permalink.

This site uses Akismet to reduce spam. Learn how your comment data is processed.